This is what blumlein records is all about now…

Please be advised that in the course of ordering any media personal and billing information will be gathered by CD-Baby and PayPal. In the case of physical media we will post the disk(s) as soon as we receive notice of payment received. 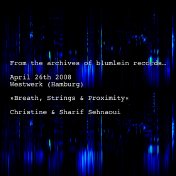 On Saturday, the 26th of April, Christine Abdelnour and Sharif Sehnaoui performed as a duo for the first time in ten years at what turned out to be one of the highlights of the blurred edges 2008, the 3d instance of Hamburg’s independent contemporary music festival. The air flowing through the Christine’s saxophone and the sounds Sharif coaxed out of the strings of his guitar wove a magnificent sonic tapestry, sometimes delicately merging, sometimes clashing to flow back to the common ground – a hypnotic groove…
Recorded puristically at Hamburg’s “Westwerk” in ORTF configuration with two high-res Oktava mk012 microphones tuned by United Minorities. Mic-pres & AD: Metric Halo ULN-2. Recorded at 24-96. No compression besides (2d) tube saturation was applied, preserving the original dynamics. This is as pure as it gets 🙂 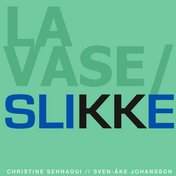 “La vase” has quite a bad reputation because she reminds people of rot: sometimes she smells bad, other times people are just afraid because she seems bottomless. But if we really look at her, we realize her beauty: she is bright in the sun, has silver colours, and her scent is full of life.
La vase has her own life and her own breath, she is not just mud but a true being. Yes, she is bulky and big, terrible but kind because we can walk on her back. And if you rest on her, you can hear her world, a joyful calm, a seething serenity, a symphony of silence. [SAJ & IT]

Recorded puristically with a central Blumlein pair (2 x United Minorities UM-1), one spot (Earthworks QTC-1) inside a large cardboard box to the right and one spot (DPA 4060) underneath the central cardboard Hi-Hat. All four time-aligned tracks go straight into a Metric Halo ULN-8 at 24 bit & 192 kHz. Samplerate-conversion of the realtime-bounce to 44.1 kHz with the iZotope SRC, dither to 16 bit with Airwindows’ Ditherbox (Vinyl setting). 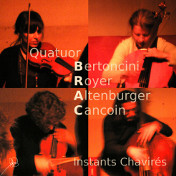 This release features the single set played by Quatuor Brac–Tiziana Bertoncini (Violin), Vincent Royer (Viola), Martine Altenburger (Cello) and Benoit Cancoin (String Bass)–at one of the premier locations for improvised music: Les Instants Chavirés in Paris. An intense atmosphere gave birth to a magnificent sonic exploration of simplicity and complexity, density, colours and textures. This is an evening to be remembered and enjoyed many times!
The performance was captured with a close Ambisonic setup (Core Audio TetraMic) and a more traditional ORTF pair (two United Minorities tuned Oktava mk102 cardioids), placed further off, both fed into one of the best microphone-preamps and ADC’s available (Metric Halo ULN-8). The stereo downmix features a careful blend of both time-aligned systems. 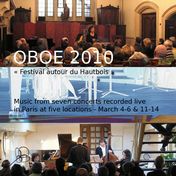 In 2010 blumlein records documented the 10th instance of the festival OBOE in Paris. Eight concerts at five locations, the Cathédrale Americaine, the subterranean Auditorium de la Cité des Arts, the glass enclosed Conservatoire du Centre at Les Halles, Bateau Daphné on the Seine and the venerable Schola Cantorum.
All performances were recorded puristically with a main stereo setup (usually ORTF), two ambient outriggers and one occasional spot microphone (e.g. for the harpsichord) feeding a ULN-8 by Metric Halo at 24 bit and 88.2 kHz.
Get ready for an exciting voyage atop of and through a sonic tapestry featuring the oboe prominently but not exclusively-and above all enjoy the music! 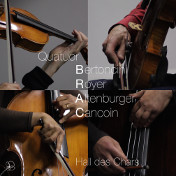 From Percorsi Musicali by Daniel Barbiero: “Considered in the most general terms, the recording is a remarkable realization of a freely improvised timbral counterpoint. By putting lines made of sound color against each other, BRAC succeed in conserving the fundamental formal quality of the string quartet while working with a largely untraditional content. This isn’t to say that more conventional pitches and phrases are absent; members of the quartet play elongated harmonized tones or sequences of tones at various points in the performance. But the main focus remains on the contrasts and similarities of timbral qualities, and the layering and interplay of sounds in determining changes in textural density and saturation.

Although improvised, the set is in effect a real-time composition made up of planes of sound pushing and pulling against each other. Many passages have all four instruments stacked in fully-voiced strata of long duration. Within these events timbral contrasts are brought out in a variety of ways: Long harmonics extend over a thick underlayer of tapping and creaking that gives way to a midrange drone; rough vibrato bowing or whistling gull-like sounds float over a long-held unresolved dissonance; massed siren-like glissandi move upward and downward with and against each other. Just as suddenly these dense, highly saturated events may dissolve into short, sharp episodes made up of widely spaced plucks and percussive strikes.
The nonstandard makeup of the BRAC quartet–consisting in its substitution of a double bass for a second violin–works to the group’s advantage in crafting a sound profile uniquely its own. The double bass is an essential element in leveraging the full spectrum of colors available to a string ensemble, adding, as it does, a noticeable degree of shading to the overall sound. Beyond supplementing the range of an ordinary string quartet, Cancoin’s bass opens space within the ensemble by supplying spare timbral accents under the other players, particularly Royer’s denser viola lines. In fact, in an inversion of the more usual string quartet practice, Royer’s viola often takes the role of lead voice, with Bertoncini and Altenburger creating inner lines of subtle balance.
In May 2014 the quartet toured Metz and Strasbourg, recording material for an anticipated second release. Video excerpts of the two concerts and of a concert recorded the day before in the studios of Radio France give promising evidence of the group’s delving deeper into the possibilities inherent in timbral counterpoint.” 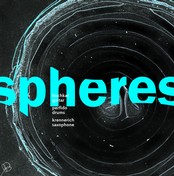 “Spheres” was recorded March 24-26 2016 at the fortress of Germersheim with a trio featuring Boris Kischkat (guit), Peter Perfido (drums) and Andreas Krennerich (sax). The minimal setup: central Blumlein, one spot each for sax and guitar, three for the percussion and two ambient microphones into a Metric Halo ULN-8 and ULN-2 at 24 Bit 96 kHz we captured the energy and movement going on during introspective exchanges and a small live concert.